Using the Past to Prepare for the Future

Technology evolves faster than we can adopt it, but old methods — very old methods — sometimes are the best solutions. In this case, it’s a centuries-old canal system in the mountains surrounding Lima, and it might help save the Peruvian capital a future of drought and flooding.

The rainy season last year brought Peru’s worst flooding in decades, causing dozens of deaths and about 150,000 people displaced from their homes. While the flooding mostly hit the country’s northwest region, the torrential downpours from January to April 2017 affected much of the west coast, which sits on the Pacific Ocean and experienced a “coastal El Nino” event last year.

Among the coastal areas affected was Peru’s capital city, Lima, home to about 9.8 million people and the second-largest desert city in the world. (Cairo is the largest.) In addition to flash floods, the city had to stop water treatment for five days after landslides clogged treatment plants with tree trunks, debris from homes, and livestock.

Lima, which on average receives only a few inches of rainfall each year, is already used to water scarcity. A reported 1.5 million city residents lack sufficient water supplies, and with climate change, both drought and flood conditions are expected to worsen.

The mountains surrounding Lima are the city’s main water supply. But much of the mountain land has been overgrazed, mostly by cattle and sheep. That grazing has led to vegetation loss and soil compaction, leaving excess rainwater with nowhere to go. It rushes from the mountains down to Lima quicker than the city’s residents can use it, and it leaves everyone, both in Lima and the mountain villages, short on water.

Now, government officials and citizens are trying to prepare for the potentially rough future. In 2015, several local and international agencies began a series of projects in the areas surrounding Lima aimed at balancing the water supply, to reduce flooding in the wet season and drought in the dry season. This includes the restoration of that pre-Incan infiltration system, known as the amunas.

The amunas system slows the flow of excess water. Stream water is diverted into the canals, which lead it beneath the surface of the mountains. Then it takes time to trickle through the cracks and aquifers inside the mountains before it emerges from springs below. In other words, the water literally goes through the mountains to reach the city, and farmers can access it along the way for drinking and watering crops. 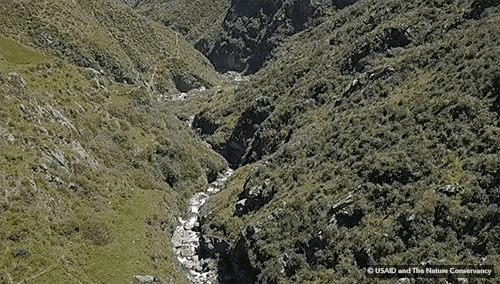 Several donors and nonprofits, including USAID and The Nature Conservancy, are financing the amunas restoration work with the enlisted help of the mountain farmers.

Other planned work includes restoring drained wetlands and changing grazing practices so farmers use fewer cows on fewer grasslands. These projects were chosen based on the results of a study published by Forest Trends in 2015, which found that each of them, particularly the amunas restoration, could substantially decrease water deficits at a low cost.

In addition to the funding from other agencies, the Lima water agency, SEDAPAL, began allocating millions of dollars in taxes for these projects in 2015. This funding structure means downstream water users are paying for upstream conservation, which ends up benefitting both upstream and downstream residents.

At the end of last year, USAID leaders announced the agency will be contributing $15 million in funding toward a new five-year endeavor, known as the Natural Infrastructure for Water Security project. The project, which will be implemented by Forest Trends and local groups in Peru, aims to make natural green water management systems — like the amunas — more common in Peru than traditional “gray” methods such as dams, and to integrate the two approaches where gray systems are necessary. The project officially launched this month, with additional funding coming in from the Canadian government. While the details are still being worked out, project leaders feel it’s a promising expansion of the work they’ve already begun with community members.